One afternoon a few weeks ago I took the kids out for some photos after school...I have to say I think we had one of the funnest afternoons in ages...the kids enjoyed it and they were really getting into it...I mean who wouldn't when your mother actually 'encourages' you to go hitch hikin'!

So these were some photos we took for Mike's mums birthday...I have to say this was my favourite part...I was trying hard not to laugh so that the pictures wouldn't be blurry when a car actually drove by with some old guy crackin' up laughing at my kids!...not helping! 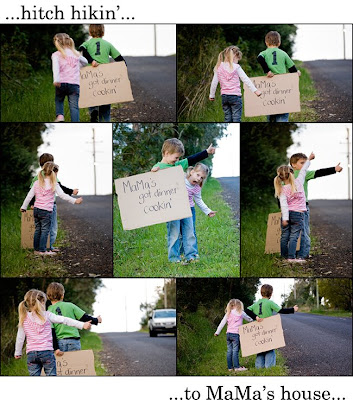 And these were for daddy for father's day...yes we have father's day in September...NOT June! 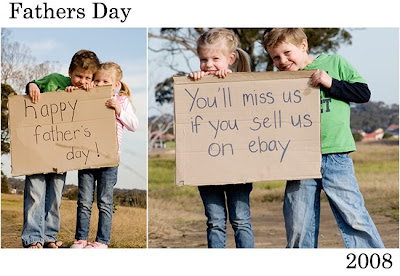 the ebay sign was especially for Mike since he's always telling the kids if they're naughty that he'll sell them on ebay...which the kids find quite hilarious...and then they sit there and have a discussion on how much they think Daddy will get for them! 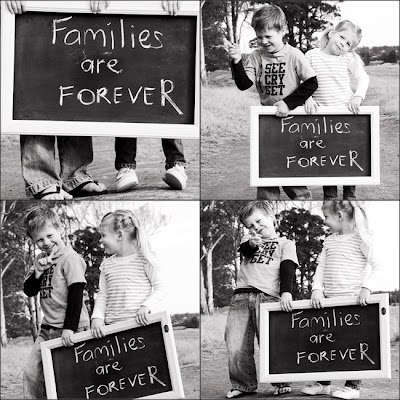 well this was just random...but Jake was in such a funny mood that afternoon that he started to do this hilarious little dance...this was definitely one of those moments that I wish I had my video camera on me!
Posted by Sals at 20:32

OK, you are brilliant! I can't praise these pictures enough. The Families are Forever are the best. Jake looks awesome in the last two.. love it! SO CUTE... so how much would it cost for me to fly you to the states and have you do family pictures. I COULD put a second mortgage on my house... hmmm

You are just so great with pictures...what a great idea! You are an inspiration:)

I love the ebay thing. Such fun pictures!

i hadn't thought of selling henry on ebay. i could threaten to sell him to the gypsies, but maggie's dating one and i'd hate to have to actually get called on it.

sal, i thought the kids were hitchhiking because mom was cooking dinner, i.e, hitchhiking away from mama's. (remember the ketchup and mustard spaghetti you made one time?)

you're kids are a riot! i wish i could be a fly on the wall in your house.

Oh my goodness! You need to do this for advertisments! You are so good at this. And your kids need to be models. I love that you did this. What a great idea. I love it. You are so creative. I'm impressed for sure.

I only wish I'd taken more silly pictures of my girls when they were younger *sigh* where does the time go???

Enjoy every moment you can. Before you know it your oldest will be starting their first day of work ... like mine is today.