...Jake's room has always been one of those 'I'll get around to it' things since we moved into our house...now 2 and 1/2 years later and new baby nearly here I thought maybe I'd better do something about it or it'll be one of those MANY ideas I have, that never seem to make it from the idea, to the real thing! So the husband and I sat down and made a whole plan - measurements and all...have moved furniture around and made room for a desk that will come over the next few months as time and money allow. The rest I've slowly been doing bit by bit over the last little while...and although it's a long way from done...I'm just happy that something is actually being done!

Jake loves star wars...I love pottery barn...we don't have pottery barn here...it's a sad thing and it frustrates me to no end sometimes...and because we don't have pottery barn here...our target doesn't stock 'pottery barn look alike' stuff (without the pottery barn price tag!). So since it'll be awhile before our next trip to the U.S...(which I've told my husband will be purely 'a shopping trip' :) I've started to look at what I can do myself...the husband then started to get into it and if any of you remember the post I did about a year or so ago about the bed head that he made me...you'll see that he is quite handy...just has a very time consuming job which limits his 'handiness' to me...(I know... again frustrating!)

But then some kind of miracle started to happen - he doesn't have any extra time... in fact less than normal, but he started to look at some of the things on pottery barn that I liked and he was convinced that he could make most of it!!!!...needless to say I immediately threw ALL my furniture out and eagerly awaited the expected goods.... ok, so maybe not...I am pregnant, but I'm not that out of it! So my point is...he's actually helping me do Jake's room - and he's NOT gay....that's the miracle!

But before I go on, I have to mention how freaking pedantic the guy is when I do stuff like this when I'm preggo. He goes a little OVERBOARD... like for eg. I'm not really a coke drinker...never really liked the stuff...in fact I don't really like fizzy drink (soda) much at all...but if we're traveling somewhere and I need and I say need a drink immediately...he won't let me take a sip of his coke...because it's 'bad' for you - HELLOOO - you're drinking it!!! just give me a darn drink of coke!....and then he remembers what it's like to say NO to a pregnant woman...and well lets just say...I'm not thirsty anymore! 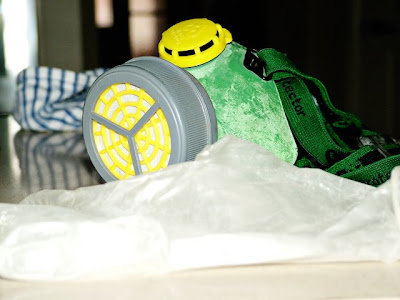 so when I went to do Jake's star wars painting he literally refused to let me do it until he got a GAS MASK!!! I had one of those little disposable masks for when I'm sanding...thought that was just fine for the painting...but nooooooooooooo I not only had to immerse myself into a star wars painting I had to actually BECOME Darth Vadar himself...!!!! 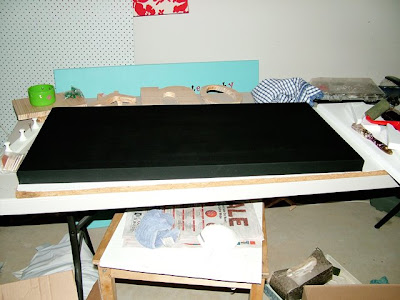 ...and I had to wear gloves (which I would have anyway - but I'm not admitting that to him!) and if he had a disposable body suit he probably would have made me wear that too!!! 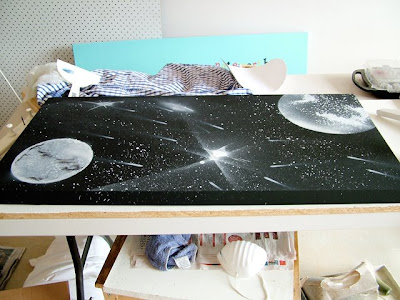 ...and the finished product...Jake and I are so excited...J. because he gets his painting...me because I can take the stupid gas mask off and cross another thing off my list of things to 'get around to' - oh and did I mention that it's glow in the dark too!!!

( and yes for any of you who look long enough you will see PLENTY of mistakes...heee but Jake hasnt' figured that out yet so I'm going with it...although then he did start demanding a spaceship...and I told him NO WAY this is it buddy!!)

Look at you! The blog is getting an overload.
But hello! How funny is that. I could just see it all playing out in my head. You telling Mike how it has to be done and him smiling and doing it his way. ha ha.
That picture turned out so good. Why isn't there a photo of you IN the gas mask?

I KNOW...I mean I thought about waiting another 2 mths for a post but hey...I'm in hypo mode at the moment :)
...and as for a picture of me IN the gas mask...the thought was there for all of about 1 second...then I totally forgot about it...and you know what that means...it's obviously the wrong decision...:) heee

Hi Sally! It was great catching up (briefly) the other day :) I LOVE LOVE LOVE YOUR PICS on here! You are so talented! (that goes for your photos and your star wars 'piece')! Hope you have a great week!

ps)as discussed, I gave mel your blog address :) she'll love checking out all your pics!

Hahaha I know these feeling very well!!! Love it!

the painting is awesome! good job!
that's funny... pedantic... a mask and everything. :) i just about hate every soda now. except when i'm dying of thirst and there's nothing else to drink.

Awesome canvas Sal! That's amazing! Makes me wish I had a boy!!